A couple of weeks ago a client who is a Microsoft Gold ISV partner approached me about building out a test lab environment in Microsoft Azure.  For those of you who may not know, Microsoft Azure is Microsoft’s public cloud offering (IaaS / PaaS / etc).

Ultimately, my client wanted an environment that they could prepare initially, then replicate.  The clients goal is ultimately to be able to provide some of their potential clients with a live trial of the enterprise software they create.  So, a big public cloud provider like Azure was a perfect fit.  Obviously, you could also use AWS / Google Cloud or any one of a number of big IaaS providers for this purpose.  However, since this client is a Microsoft Partner, and mostly a Microsoft shop overall, Azure was the direction they wanted to go.

Since the client ultimately wanted to automate the replication of these environments, I dove in to find out what the best way would be to do this.  It did not take long to figure out that Microsoft Azure PowerShell would offer the exact functionality I needed. So, I decided to dive in and learn a bit while doing this.

If you ever wanted to build a lab setup quickly in PowerShell perhaps this will help you too.  It’s unlikely my script is perfect for your project, but perhaps it will serve as a starting point for something you can customize to fit your needs.  Here are a few things to mention before you get started.

Once you have all that done, you should be ready to run the script.  The sample script below will build two Azure VMs.  You can choose the following variables in the Pre-Deployment Variables section of the script before running it.  Those variables are:

Once you have those chosen variables, you should be ready to roll.  Oh, before you run the script… Please remember that I am in no way responsible for what this script might do.  I believe it to be useful, and generally safe.  You should make sure you are 100% comfortable with what this script is doing before you begin.  Ok – now that the lawyers can sleep again at night, here we go.  When you run the script you should see output something like this. 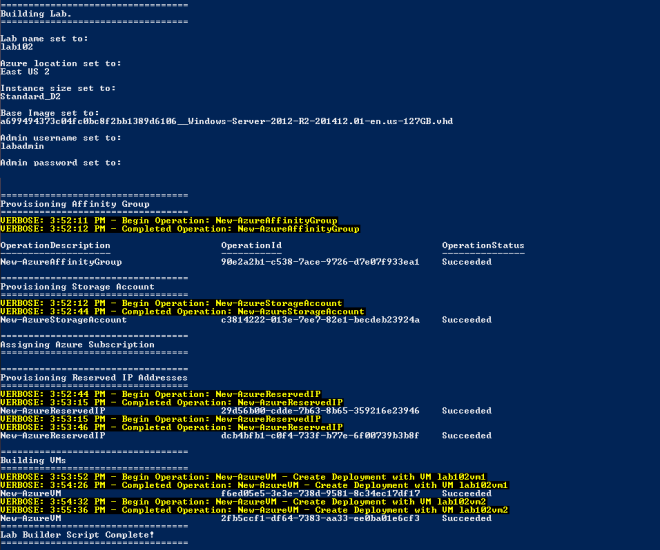 Here is what is going on in the background.

In summary, I am sure this script could be improved.  However, I also hope it is in good enough shape to be helpful to some of you.  If you see ways it could be made better, please let me know.  Keep an eye on my blog for my lab replication / lab destruction scripts that I’ll be posting soon.