As I mentioned in my intro post I’ve decided to do a bit of a reset on my learning to code journey and focus on some of the basics.  To that end, early this week I found two great C# resources that have helped me make some real progress this week.

The first resource I used was: The C# Yellow Book written by Rob Miles (@robmiles). Apparently, this book is “used by the Department of Computer Science in the University of Hull as the basis of the First Year programming course.” 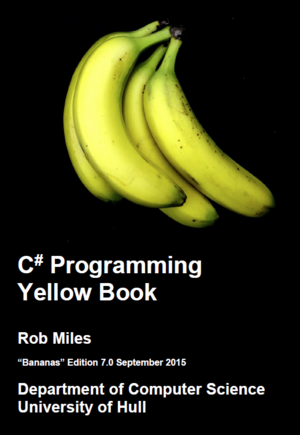 This book is exactly what I needed.  I downloaded this on Monday and I have been consuming it all week.  It really helped cement my understanding of some of the important C# basics. Honestly, it also got into a few things that I’m currently still a bit fuzzy on.  I will probably try to get back into those sections again in the days ahead.

If you happen to be following along and you want to learn to code C#, I think this might be a great place for you to start.

The second resource I found this week is this Intro to ASP.NET MVC video series from Microsoft Virtual Academy.  This series was recorded live by Jon Galloway (@jongalloway) and Christoperher Harrison (@geektrainer).  These guys walk through some of the basics on MVC framework.  I’m only about 50% finished with this, but so far it has been very helpful and taught me some of the MVC framework fundamentals.

So far they have mentioned three additional resources in particular that I’ll certainly be checking into further.

Summary:  This week, I made some good initial progress toward my goal of becoming proficient at C# / MVC framework development using Visual Studio.  I still have an enormously long way to go.  However, I feel like this week I actually started to build a small but sturdy foundation that I can build further on going forward.